Getting Back to You...

In an earlier post, I said I thought some old western movies were filmed at Smith Rock, but I'd have to get back to you on that. I looked it up, and here is what I found:

Much of the 1994 film adaptation of the 1976 book Even Cowgirls Get The Blues was filmed within view of Smith Rock. Partial filming for the 1997 feature The Postman took place on location, while it additionally appeared in Swordfish in following years. Several westerns have been filmed here, including the John Wayne and Katharine Hepburn film Rooster Cogburn. The Rockhard building at the park entrance was built as a movie set for this film, portrayed as "Kates Saloon". 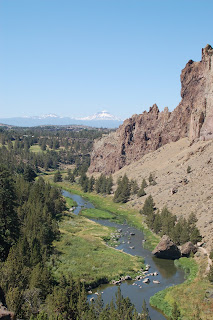 Pretty impressive. Having just watched the remake of "Rooster Cogburn", I think this is a good time to add the original to our Netflix list!

Anyone visiting Oregon, really should plan to spend a day at Smith Rock. It's beautiful! I never get tired of going there, and I'm an eager tour guide! (Even the worst photographer can't take a bad picture here.) 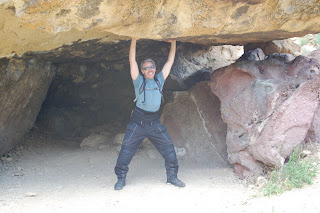 **Note: I guess the movie we just saw was "True Grit", but the Rooster Cogburn Character was in it.
Posted by Stacie at 10:16 AM