Oh Recycling We Will Go!

Every couple of weeks I need to take care of the garbage and recycling around here. That doesn't sound very exciting, or blog worthy, but in Oregon, we take our recycling pretty seriously, so come along and I'll show you how it's done. 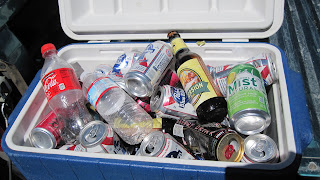 In Oregon, you pay 5 cents deposit per can or bottle. This applies to soda, beer, and water. We get the 5 cents back when we return the empties to the store. I think this is supposed to deter people from littering, and encourage recycling. It does work, but not always the way it was intended. There are lots of folks, like us, who save their cans and bottles until they can't stand to have them around any more, then we take them to the bottle return at the store; but there are still lots of people who litter, or just throw the cans and bottles away. This has sparked a cottage industry amongst the low income, and mostly homeless, who have rigged up bicycles with trailers, and go digging through trash and recycling bins. This isn't a problem, really, the stuff gets recycled either way, but sometimes they do their prowling late at night, and if the garbage bin is right near your bedroom window, it can wake you up and make you crabby. I know this for a fact.

Household recycling is all the paper, cardboard, plastic, glass jars, etc. Boxes, like from cereal or mac and cheese, are folded flat and recycled. Junk mail is recycled. We even recycle the cardboard tubes from the toilet paper. 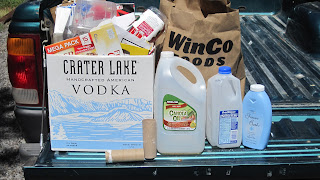 To answer the question on everyone's mind...no, we did not drink a case of Crater Lake Vodka; that's just the box we keep in the closet to throw the recyclables in.

After all the bottle, cans, and household recycling items have been sorted, we are left with this: 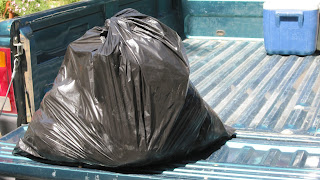 Once the truck is loaded, we head off to the recycling center at Sunriver. It doesn't cost anything to leave the household recyclables. 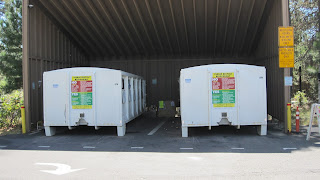 Here are the bins. There is a place for glass, a place for large flat cardboard, and the rest just goes together in the bin.

Next, we go to the bottle return at the store. Every grocery store in Oregon has a bottle return. It is usually located somewhere outside the store. Most are kind of smelly, and there are usually a lot of homeless, at least they look and smell homeless, folks hanging around. In the busier areas, you may have to wait your turn. I love the bottle return at Sunriver, because it's kind of an upscale place. They keep it really clean, and it doesn't really attract too many of the previously mentioned sort. 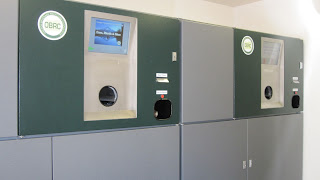 At the bottle return, you place your cans or bottles one by one in the hole, the machine reads the bar code, and gives you credit. The cans must not be smashed. The machine will smash the can after it reads the bar code. When you are done, push the red button, and a ticket will be generated that looks like this: 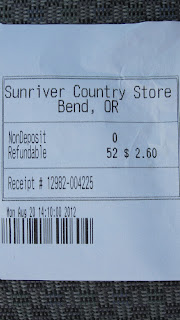 This ticket says I had 52 cans and bottles, and I get $2.60 back. I took the ticket inside the store, and handed it to one of the checkers, who gave me this: 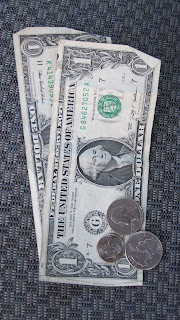 Not too bad. I could almost buy a couple of cans of soda, and start the whole process over again!
Thanks for recycling with me!