Yesterday I needed to get out of the shop, and have a change of scenery, so I packed up the Camel Back, and went for a walk. I guess it was really more of a hike, but hiking to me is more strenuous walking with elevation changes. This hike was relatively flat, and about 7 or 8 miles, depending on which sign you believe.

I parked the truck at the north end of Sunriver, and headed for Benham Falls. The trail winds through the forest, and along the Deschutes River. It's narrow and dusty, and a favorite with mountain bikers from Sunriver. I was hoping that since it was Labor Day, maybe the tourists were heading home, and the bike traffic wouldn't be too bad. I did encounter a few, but they were huffing and puffing along at a slow enough pace, that I could easily get out of the way. They do kick up a lot of dust, though.

I saw this purple flower growing out of a rock formation. 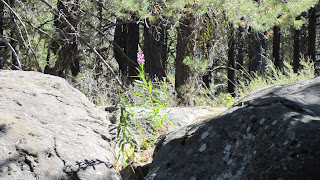 I saw some great views of the river. 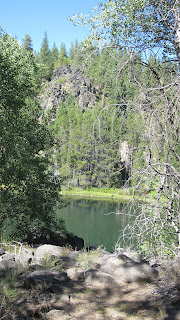 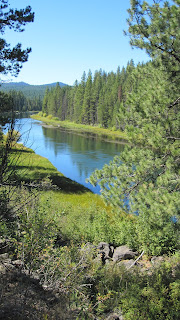 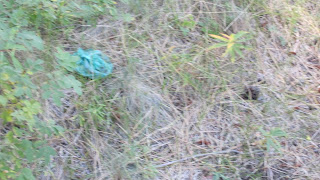 Okay, it's a little blurry, but it's a bag of dog poop by the side of the trail. We interrupt this hike, to bring you a dog poop rant. Who does this? I saw more than one of these yesterday, and I've seen this many, many times when I lived in the city. I'll be the first to say that I don't like dog poop on the trails or sidewalks, but at least it IS biodegradable. By putting it in a bag, and leaving that bag in the woods, you are insuring that it will be around for my grandchildren to enjoy. This defies any logic. If you're the kind of person who carries a bag, and picks up poop, you should be the kind that takes it to a garbage can. If you don't want to carry it; make the dog carry it. If you want to leave it in the woods, then don't put it in a bag. Push it off the trail and cover it with some dirt! Okay, I'm done, but sheeesh, who does this?

The next part of my journey took me over this bridge. 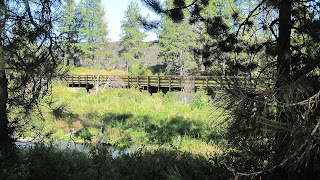 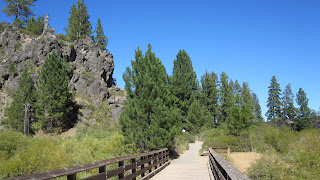 The trail from here to Benham Falls is wider. A sign said that this used to be an old train track in the early 1900's. It was used to move lumber, before the highway was built. 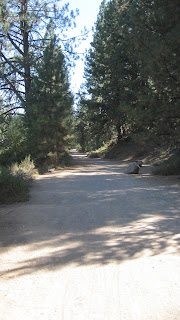 The next picture is of a sign you don't want to miss, if you're in a boat.... 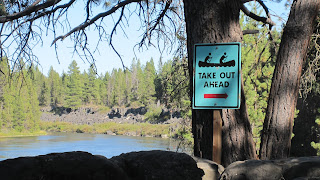 ....because it is at this exact point, that the river goes from flat and lazy, to white and crazy! 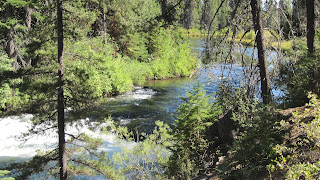 Benham Falls isn't so much an actual waterfall, as it is a chute of fast moving, churning, white water. The lava rocks form a deep, narrow canyon, that the water travels through with frightening speed and force. 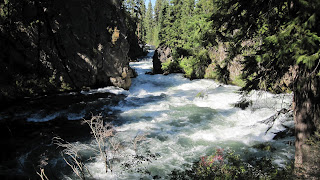 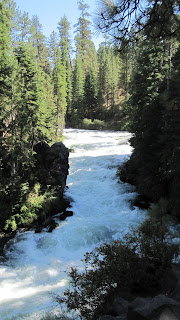 Whew! I hope you remembered to take your boat out!
Once the river has passed through this turmoil, it calms down again, and flows through a volcanic rock area, with a great view of the mountains in the background. 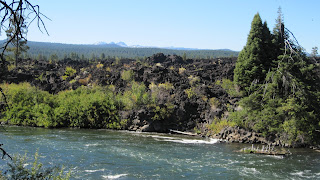 I walked a little further down the river before turning around, and heading back to Sunriver. On the return trip, I came across this little guy. 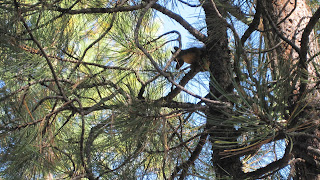 He had a big mouthful of pine cone, and gave me a serious scolding. He screeched and yelled at me for several minutes. Maybe he thought I left a bag of poop in the woods!