Let me get this straight, you're going to pay me $200 to ride my motorcycle around Mt Bachelor all day? Well, heck yah, I'll do that! And so began my adventure as a "Motorcycle Escort" for the Leadman Triathlon.

The details were a bit sketchy; I was told to show up at the Cultus Lake boat ramp at 7:30am on Saturday, and be prepared to have a passenger. When asked earlier if I was comfortable riding with a passenger, I answered "Yes, as long as they aren't too heavy". When I arrived at the boat ramp, I was the only female rider, and all the passengers appeared to be larger males. Hmmm. There were eight hired motorcycles; (though, I'm sure I counted ten) our job was to carry the officials, and professional photographers around the bicycle part of the triathlon course. One motorcycle, carrying one official, would be dispatched for every forty bicycles that left the staging area. We lined up at the bicycle staging area, and the officials picked their ponies. One of them decided he was going to ride with me. I have no idea why. There were larger riders on bigger bikes. Not being male, I don't know what is worse from the male point of view; riding on the back of a motorcycle with a female at the controls, or riding behind another dude. Maybe this guy thought I was the lesser of two evils. Having only ridden female passengers, who were all about my size, I was extremely sceptical of the impending situation, and I was right. My bike is somewhat top heavy to begin with, and when Mr Official got on, we went over...like a lead balloon, as the saying goes. Plenty of people around to right the motorcycle, no one hurt, and no harm done, but we mutually agreed that this was not going to work. Mr Official hopped on a Gold Wing with another male, and rode off.

We were told at our very brief briefing, that if we didn't have a passenger, we were to ride as decoys. "When the bicycles hear you coming, they won't know if you are carrying an official or not, but they will assume you are, and if they are doing something illegal, they will stop. If they don't stop the behavior; call them on it." Yeah, 'cause I know all the rules of triathlon bicycling. I bid farewell to two Harley riders, who also had no passengers, and set out to be a decoy. Realizing I wasn't wearing my sunglasses, and needing them badly, I stopped at the end of the road to Cultus Lake to put them on. I was instantly approached by a wirey guy with a large camera, asking if I had room for a passenger. I asked him how much he weighed, and explained that I dropped my previous passenger on his backside. He wasn't fazed by this information, and only outweighed me by thirty plus pounds, so we decided to give it a try. He introduced himself to me as AJ, hopped on the back with a lot more skill and finesse than Mr Official, and away we went! We stopped at several points along the route, so AJ could take photos as the bicycles went by. I enjoyed these stops, because the people who were congregated there, wanted to talk about my motorcycle. I had a golden opportunity to talk up our business, and hand out fliers. At one point during the day, we rode past Mr Official, and Mr Gold Wing. I gave a hearty wave, and they looked somewhat surprised, or amused see me with a photographer hanging off the back of my bike.

It was a beautiful day for a ride, the course was great, I was done by three in the afternoon, and supposedly there is a check for $200 in the mail for me. Would I do this again? Probably. Just need to keep my eyes open for a skinny photographer!

Here are the athletes swimming laps in Cultus Lake. I know they were wearing special suits, and the lake water was probably warmer than the air, but there is no way I would be in that lake! The air temp was hovering at 32 degrees, just before the sun was fully up! Brrrrr! 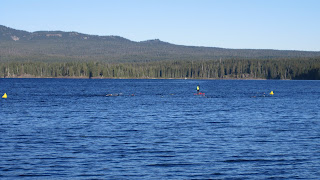 Bicycles waiting for freezing cold swimmers to emerge from the lake, and ride them. 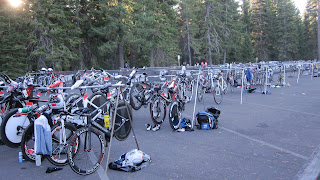 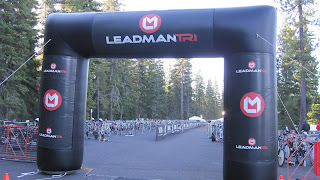 This sign made me giggle like a 12 year old boy, but I wasn't the only one who took a picture of it. 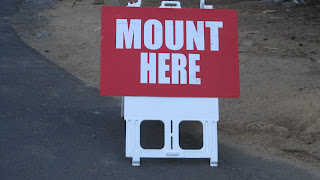 A bicycle rider getting ready to mount. The shoes are already attached to the pedals, so they just slip their feet in. Notice how the people in the background are dressed. 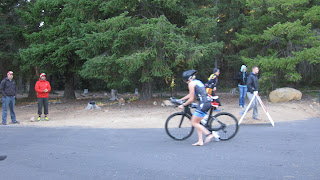 One of our photography stops. Interesting people, nice dogs, great view of mt Bachelor in the background. 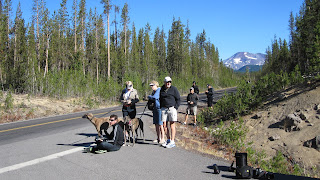 One of the photographers chose to ride backwards, in order to get some good shots. 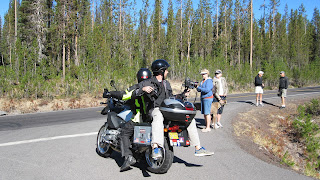 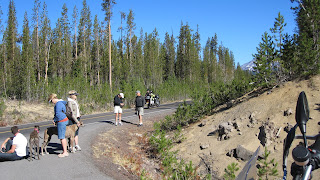 Handing off water to thirsty cyclists. 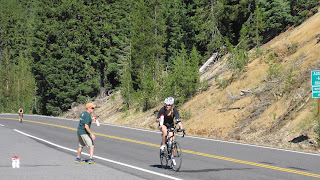 Red, taking a break next to Devil's Lake. 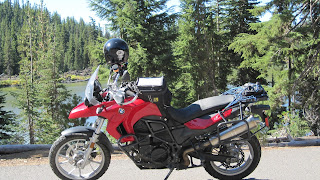