They Look Great! (So Leave Them Alone!)

I'm putting on my mom hat for this one...actually, my band mom hat, and it might turn into a rant, so hang on!

As some of you may know, my daughter Haley, is a senior at the University of Oregon, and she is a member of the Oregon Marching Band. She plays alto sax, and like all her 250+ band mates, she works her butt off. School just started yesterday, but the members of the OMB have already put in 96 hours of practice, played at pep rallies, the freshman convocation, and appeared at three football games. On game days, the band arrives at the stadium many hours before the game starts. They practice on the field, they play to the tail gaters in the parking lot, they play to the crowd waiting to watch the big screen at the baseball field, they open the football game with a pre-game show, (...that includes one of the best renditions of the National Anthem that I've ever heard. You can listen to it here.) they play in the stands during the game, and of course, they play the half time show. This Friday, the band members will board buses, ride to Seattle, perform their half time show at a high school football game on Friday night, go through the whole game day routine on Saturday, ride the buses home on Sunday, and attend classes on Monday.

Over the last three years this band has been to two Rose Bowls, and one National Championship Game. They've played at Disneyland, Santa Monica Pier, the Phoenix Zoo, and marched in the Rose Parade twice! These kids work hard, they love what they do, and they're good at it!

When the football team is ranked, and doing well, the band gets more exposure, and when the band gets more exposure, the nasty comments start flying about their uniforms. "Oh dear! Did they lose their uniforms on the way to the parade? The poor things are wearing their warm up suits." or "Why can't they wear traditional marching band uniforms?" or "They're wearing baseball caps!" Here is a picture of Haley, and some of her friends, wearing the current uniform. 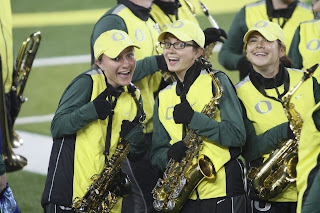 The uniforms are designed by Nike, and given to the band. Each band member also gets a spiffy pair of Nike shoes, designed specifically for the band. They get a brand new pair each year. Haley now owns four pairs.....well, three pairs, She gave her freshman pair to me. Nike also designs the Oregon Ducks football uniforms, and the the cheerleaders uniforms.

The band uniforms are not traditional. They are somewhat athletic looking. (Ask any band member, and they will tell you "Marching band is a sport!") The band does a lot more than just "march"; they do a lot of running, jumping, dancing, pelvic thrusting, ahem, and marching, so why shouldn't they have a uniform that is comfortable, and easy to move in? The uniform is bright yellow on the front, and green on the back. When the band makes quick front to back movements, the yellow flashes for high impact.

The football team has evolved from this: 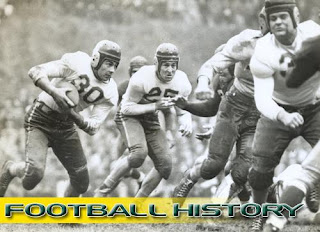 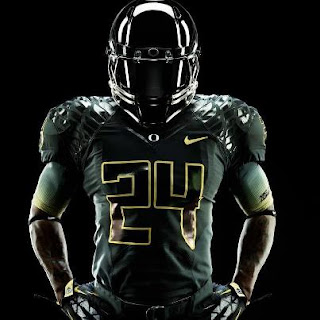 Nobody is suggesting that the cheerleaders need to look more like this: 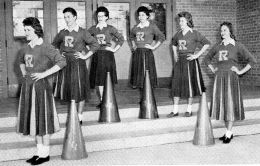 The cheerleaders have become way more athletic too. Now they look like this: 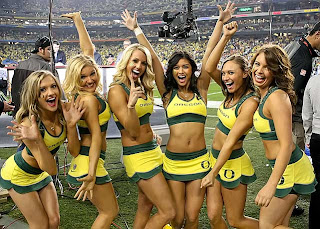 So why would people want the band to look like this: 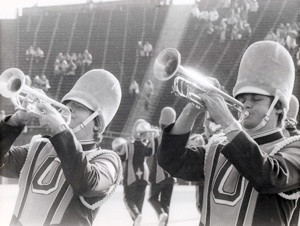 The OMB is no longer a wool clad, shako wearing, militaristic, marching band of the past. They're blazing a new trail, they're bringing marching bands into this century, and they look great! (So leave them alone!)
Posted by Stacie at 11:47 PM